Defence force won't be fighting bushfires - Australian Defence Force personnel will not be on the ground fighting bushfires.
Festival of Voices goes virtual - Hobart's much-loved Festival of Voices is moving online for this year, as a result o ...
UTAS plan to weather grim finances - Plunging finances has UTAS releasing a plan of reigning in wages to save jobs. Pandemic ...
Australia is now in a recession: Treasurer - Federal Treasurer Josh Frydenberg has confirmed Australia is now in a recession after 29 c ...
Dragons to monitor Clune nose injury - New St George Illawarra halfback Adam Clune will have his nose injury monitored in coming ...
Qld govt dives into domestic tourism push - Queenslanders can forget sunning themselves in Bali, Thailand or the Greek Islands.
Menzies blood pressure program - The University of Tasmania&rsquo;s Menzies Institute for Medical Research is taking ...
No charges for woman found with Barbaro - A woman whose penthouse in Sydney was swarmed by police during the arrest of accused mur ...
UK opens citizenship door to Hong Kong - UK Prime Minister Boris Johnson is ready to open the door to nearly three million Hong Kon ...
Bashed Aust news crew 'bit worse for wear' - An Australian news crew are battered and bruised after being bashed by police outside the ...

One of my favourite movies growing up was “Mall Rats” the extremely fun film was a part of the View Askew Universe from the mind of Kevin Smith and starred Jason Lee & Shannon Doherty amongst a massive ensemble cast. Prior to that Smith had made the popular film “Clerks” but that film although great didn’t hit home as Mallrats did for me. From there it was a cinematic journey of ridiculous fun for many years. I now listen to Kevin frequently on his podcast network Smodcast so yeah you could say, I'm a fan.

That’s where the real payoff of nostalgia is for me in the new video game for PC and Nintendo Switch “Jay and Silent Bob: Mall Brawl”. It takes the Jason Mewes and Kevin Smith characters of Jay and Silent Bob and puts them into a mall following a story that is really fun while in a fighting game setting similar to the NES version of arcade scrolling fighter “Double Dragon”.

The 8-bit aesthetic to the game transports you back in time to the retro console days. It was initially a concept game designed to be released as a deluxe digital download for pre-orders of the upcoming title “Jay and Silent Bob Chronic Blunt Punch” and will still be free to people who backed that game through crowdfunding. 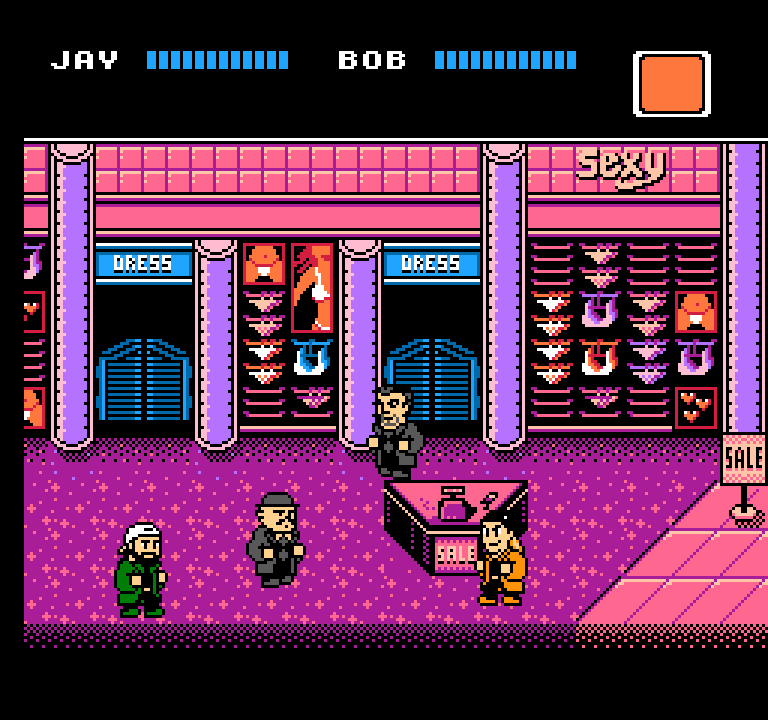 Part of the genius of this game that serves as a prequel is that there’s a limited edition physical copy available that you can buy that comes on a Nintendo NES cartridge. That version of the game is completely working and can be played on a classic NES console as well as compatible retro Nintendo Entertainment Systems, and here I was thinking Brodie was a “Sega Boy”

Playing the actual game gives you a real sense of classic arcade. The side-scrolling is super smooth and the 8-bit recreations of the characters are on point. The controls are really simple and familiar which means you can just pick it up and play it without much thought, this in itself is a throwback to classic console titles. The level design is really strong, even a frustrating “shopping cart” level, that although not my favourite part of the game is still a massive homage to the games that inspired it.

The mechanics are the real surprise, on single player you play as the either Jay or Silent Bob depending on who you select on the entry screen, but once your health drops to nothing the game swaps you out to the other character while your health regenerates all ready to swap again and continue the fight without a break in play.

The rogue’s gallery in the game is also made up of View Askew characters the highlight being a battle with the Golgothan from the film “Dogma” (1999). Plus there is an enemy with a pretzel for a head, I think that is a reference to the classic Brodie stink palm scene from Mall Rats.

If you are looking for a good harmless fun side-scrolling brawler and you are a fan of Kevin Smith like I am then I can highly recommend “Jay and Silent Bob Mall Brawl”. Now how do we convince them to make a video game out of “Tusk”.