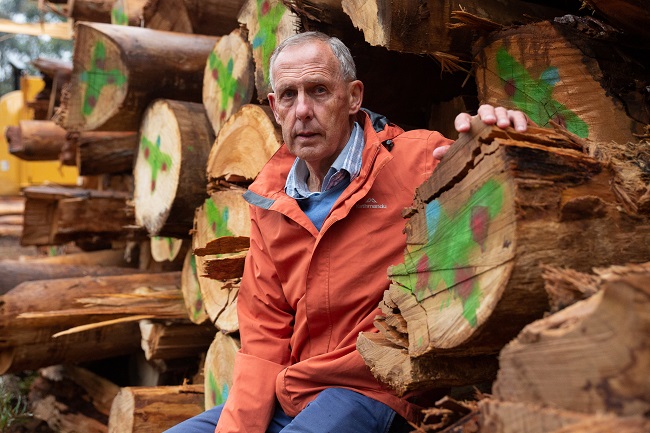 Trespassing charges laid against former Greens leader Bob Brown over two anti-logging protests in Tasmania were "misconceived", a court has been told.

Brown was arrested and charged in December after taking part in rallies on forestry land and swift parrot habitat in the state's Eastern Tiers.

He appeared on Wednesday in Hobart Magistrates Court where the matter was adjourned without plea until June 10.

Resisting arrest charges against three other protesters, who appeared in court alongside Dr Brown, were dropped after the prosecution tendered no evidence.

Dr Brown flagged taking part in further anti-logging rallies in the lead-up to the Tasmanian state election on May 1.

Speaking outside court, Dr Brown lashed the incumbent Liberal party as well as Labor for their position on forestry and anti-protest legislation.

"I have no intention of simply sitting back in an armchair and saying to (Liberal Premier) Peter Gutwein, destroy all you like," he said.

"Or to say to (Labor leader) Rebecca White, go and wreck more of our forests and wildlife."

Labor recently promised to introduce new anti-protest laws with penalties of up to $10,000 and two years' jail for individuals.

"All Tasmanians, indeed all Australians, have a right to peaceful protest," Dr Brown said.

"We're into an election period here and we've got both the big parties promising more restriction rather than honouring the right of peaceful protest in a representative democracy."

The Bob Brown Foundation is involved in a protracted legal fight aimed at ending native forest logging in Tasmania.

In February, the Federal Court dismissed the conservation foundation's case that argued Tasmania's regional forestry agreement was invalid because it did not properly protect threatened native animals.

The foundation is seeking to appeal the decision in the High Court. It argues native forest logging has put the critically endangered swift parrot at further risk.

A study found there were fewer than 300 of the migratory birds remaining in Australia.