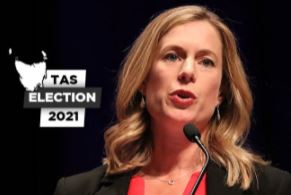 The Liberals need just one more seat to claim a 13-seat majority, and it is clear in the early stages that Labor will not reach majority.

Leading Bass is Peter Gutwein in a landslide, with 50.7% of current votes.

For Labor, Michelle O'Byrne has edged ahead of Janie Finlay.

Jack Davenport for the Greens is just ahead of other Liberal candidates Michael Ferguson and Sarah Courtney.

Over in Braddon the Liberals are dominating. Jeremy Rockliff is at the forefront with 25.8% of current votes.

Felix Ellis is being favoured over scandal-plagued Adam Brooks.

Labor's Shane Broad and Anita Dow are currently ahead for the party.

In Clark Cassy O'Connor is holding her seat with 20.1% of current votes.

Elise Archer is also off to a strong start, followed by Ella Haddad.

In Franklin, Jaccquie Petrusma is leading the charge with 19.8% of total votes.

For Labor, Dean Winter and David O'Byrne are ahead.

And in Lyons, opposition leader Rebecca White is holding her seat.

The rest of Lyons is strongly Liberal, with Guy Barnett and Mark Shelton being favoured.