Over halfway through vote count 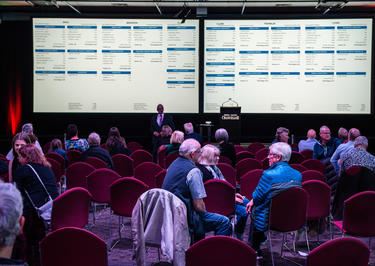 With just over 57% of the total votes counted, some electorates have been won, while others are heavily contested.

In Bass, Peter Gutwein was re-elected in a landslide, with Sarah Courtney and Michael Ferguson also holding their seats.

Labor has secured a seat for Michelle O'Byrne.

The fifth seat is still unclear.

The Liberals have secured three seats for Braddon, with Jeremy Rockliff and Felix Ellis re-elected, with Adam Brooks currently ahead in the polls over current elected Liberal Roger Jaensch.

Labor has secured one seat, with Shane Broad and Anita Dow both possible.

The fifth seat is still up for grabs, and could go to either Liberal or Labor.

In Clark Cassy O'Connor was re-elected for the Greens, with Elise Archer for the Liberals and Ella Haddad for Labor holding their seats.

The other two seats are heavily contested, with independants Kristie Johnstone and Sue Hickey both fairing well.

If the Liberals gain another quota, Madeline Ogilvie is currently set to take the seat, just ahead of Simon Behrakis.

Franklin is decided, with two votes going to Liberal, two to Labor, and one to The Greens.

Jacquie Petrusma has secured a seat for the Liberals, with the other going to Nic Street.

Dean Winter secured a seat at the expense of Alison Standen. David O'Byrne maintained his seat.

Rosalie Woodruff was re-elected for The Greens.

In Lyons, Labor leader Rebecca White secured her seat in the Liberal-dominated electorate.

Guy Barnett and Mark Shelton have held their seats, with John Tucker expected to make up the third.

The fifth seat is still unknown, with the Labor party looking likely to pick up another quota point.

In the upper house polls, Labor's Craig Farrel's looking set to be returned in the seat of Derwent but Windermere is harder to call, with Liberal candidate Nick Duigan ahead of Labor's Geoff Lyons.