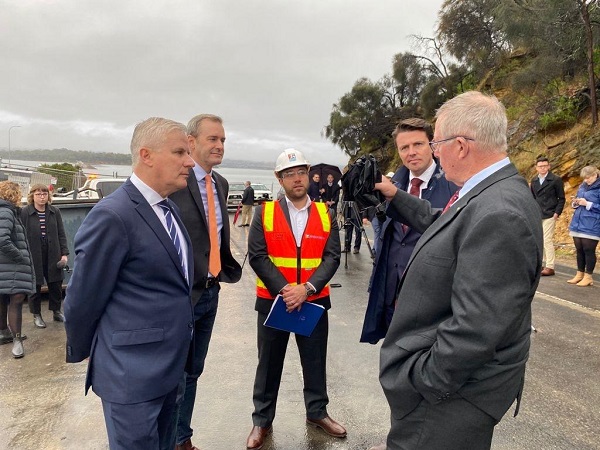 State and Federal Liberal government politicians have gathered to check out work on the so-called Midway Point Solution, designed to clear a road bottleneck connecting a rapidly growing southeast and Hobart.

The plan is to replace the roundabout near McGee's Bridge with signals and expand the highway to dual lanes in both directions.

Deputy Prime Minister Michael McCormack inspected the spot where $46 million is being spent.

"It's great to see the progress of this important corridor, this congestion breaking corridor."

Senator for Tasmania and Assistant Minister for Industry Development Jonno Duniam said the project is part of the South East Traffic Solution (SETS) program, which has a joint funding commitment of $349.5 million by the Australian and Tasmanian Governments.

Tasmanian Minister for Infrastructure, Michael Ferguson said a new Hobart Airport Interchange is now in its second stage of construction with work underway on the overpass and works have started on providing a dual-lane direct link between the Tasman and Arthur Highways through the Sorell Southern Bypass.

“The Sorell Southern Bypass will take through traffic out of the Sorell town centre. This project will help improve safety and travel time reliability. It will improve access to Sorell businesses for local residents and visitors and improve traffic flow through the town centre,” Minister Ferguson said.

Work on concept designs for the $187 million duplication of the Midway Point and Sorell causeways will start this year, with the Australian Government committing $150 million and the Tasmanian Government $37 million; and planning is underway for duplication of the highway between Hobart Airport and Midway Point causeway. When completed these projects will provide full duplication of the highway with four lanes between the Hobart Airport and Sorell. The first project, provision of overtaking lanes on the Arthur Highway, was completed in 2020.

The Midway Point Intersection Solution is expected to be complete in mid-2022.