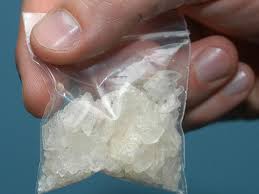 A man and a woman from the North-West Coast have been charged by police for allegedly trying to import around $750,000 worth of methyl-amphetamine, or ice, into Tasmania.

Police arrested the pair at the Launceston Airport on Sunday and seized 500 grams of the drug.

The seizure is part of an operation conducted by North-West drug squad officers targeting the importation and distribution of ice and police say more arrests are expected.

A 31 year-old Turners Beach man has been charged with trafficking in a controlled substance.

He was remanded in custody after an hour of hours sitting of the Devonport Magistrate's Court on Monday night and will reappear via video link on Tuesday afternoon.

His 43 year-old female associate from Wesley Vale was also charged with trafficking in a controlled substance and bailed to appear at a later date.